On 11-25-11, I Very vividly drempt I was in a race running. At the starting line of the race I was telling another it's a sprint and the race would be easy. I had high expectations of winning it. At the starting line, I could remember clenching my fists, and holding them up, as though I were in a fight, as well as a starting stance.

Right before the whistle blew, I could remember I was in a bad starting position, and had a big disadvantage from where others were lined up because up ahead, the track had a bend in it going right, but I was lined up to the left more than the others.

When the whistle blew, off we were, running the race. There were about 10 or 12 of us running in this race, male and female alike. At the start of the race, I couldn't find my stride. It was as though I was stalled on the whole first part of the race. I also remember stumbling near the first part of the race. Then the track had a split, as in a split in the road. In this dream, both splits lead to the finish line. The split on the right was a track that took us up above the others. The track on the left was where the majority of the runners went. It was only I and another girl who took the higher road to the right. Soon after the split, I caught my stride in the race and that is when I began to literally tear it up. I was running so fast and powerfully that pieces of the road began to come up. There was a girl who took the high road with me. As I passed her up, I saw she was a paraplegic runner with one good leg with the other lower leg made of one of those manufactured bent metal leg attachments. She also was tearing up pieces of the road as she was running.

During the race, the entire time, I was really disappointed in myself because I had huge expectations of winning the race. When I passed the paraplegic girl I said to myself no wonder I passed her up, she's running with a bum leg, while having feelings of great disappointment as I continued to run, as though I was making up for lost time. 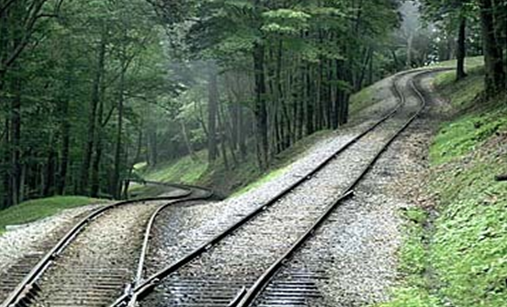 The split in the road made us go slightly up hill some, while in the distance I saw later that the low road would have been quicker. I remember the decision to take the high road was made on my part because it was not as crowded. As the road had a sharp turn in it, there was a final flight of stairs to climb before the finish line. I climbed those without loosing a stride. As soon as I reached the top, there was a quick slide down to the finish line. At the end of the finish line, I was pulled in by the judge of the race at the end of the slide. As soon as I finished, I saw a man at the finish line who was in a stretcher. He had been injured, or paralyzed.

At first, I didn't want to record this dream because I woke up out of this dream angry, that I wasn't first to finish, like I was still there in the dream, but as I began to meditate on it, the Lord began to give me interpretation and bring to my memory, the different details of the dream.

From both the low and high road chosen, the race we run is our life in Christ and dedication to him. It is also a fight, the good fight, as my stance at the start of the race with my fists clenched in a boxing stance indicated. The big disadvantage in position I had at the start of the race was representive of all those who had a disadvantage and bad start in life. My start in life was a rough one, indicated by the early part of the race not catching my stride. The stumbling during the first part of the race is how it is for many of us in life, until we hit our stride. It is also a reminder of the proverb, A righteous man will fall 7 times, yet pick himself back up (Proverbs 24:16). We always should be reminded that God called a man who fell 7 times, righteous, because he picked himself back up. He has the built in conviction and humility to correct himself, when fallen or stumbled. He's had to often learn to say I'm sorry, pick himself back up and keep running in the Spirit.

The split in the road is a decision everyone in Christ has to make. Do we take the more popular low road, which seemingly, can get us to the finish line quicker or do we take the high road, less traveled? As soon as my feet had hit the high road is when I gained my stride and it was like I had become a super fast runner suddenly. This is the power of God behind all of those in Christ who decide take the high road. It will not be popular, like with the majority of those who took the low road, but is the road of power and grace for those who take it. The low road had not this power. So much power is on the high road, that those who take it, in God's eyes, will be tearing it up in the race.

Taking the high road, I had a greater view of the entire race and could see the others on the low road, but they did not have this view. A greater view into the things of the Spirit, the things of God are for those who take the high road. Taking the high road will have some resistance to it because it is a slightly uphill run, but without that, we could not get to the greater view. Actually, it was not because the high road had too much of an uphill incline, but because of the greater downhill incline to the low road. This speaks of many people who think the high road is too hard, but that is a misconception. Their focus on how easy and quick the low road is, has distorted their view and they cannot see the advantages of taking the high road, which required a decision of faith at the split. The only reason I didn't win the race was because of my bad start in life. Had I had a good starting position and caught my stride early, I would have smoked the competition, even from the high road taken and won the race easily, due to the power of God hitting my legs when I had hit the high road. This throws so many people's evaluations off in life because they had the good start and ran downhill on the low road. In this race, it was not how you started that was as important, but how you finished and what road you ran.

Reaching the sharp turn and the final flight of stairs going up, speaks of near the end of this life. Death is a hard thing to face, but in order to finish, for everyone on the high road, this final flight of stairs is there as a test. In the race, I climbed it with no problem because of the power of God in my legs and then the slide down is where the Lord, the judge of the race, pulls us in at the end.

In this dream, both the low road and high road had met at the finish line, so this dream is not for unbelievers, but for Christians only. As in a marathon, all who run and finish are considered winners and inheritors of eternal life. However, many Christians are taking the low road in the Spirit. We will all meet at the finish line, but the Lord will greet those at the end who have taken the high road. He will not give much attention to those who've taken the low road in the Spirit, so winning the race in this dream, was not really winning it by finishing first because those who took the low road did not even have the attention of the judge, though they finished before me. I saw people finishing from the low road, but the eyes of the judge were not even on them. He payed them little attention and his back was turned to them. He had a stop watch and as each one crossed the finish line from the low road, he would click his stop watch without so much as turning his head to see who had finished, but he knew the exact time they would cross the finish line.

In this dream, the Lord (the judge) was not paying any attention to those who finished from the low road. His full attention was on pulling in those on the slide at the finish from taking the high road and his heart and attention was also on the paralyzed man in the stretcher I was seeing at the end of the race. I remember as soon as the Lord caught me and pulled me in at the end of the race, his attention went immediately to the injured man on the stretcher. By this, we must see, not to be so focused on our running the race of life that we loose sight of what is really on the heart of Jesus, those who are sick, paralyzed, handicapped and wounded both spiritually and physically. Serve them and your heart is where the Lord's is!
The sister I was seeing with the paraplegic leg, running on the high road, is a great humbling to all of us. That someone who is partially crippled would run the high road and be handicapped at the same time is amazing! That is an encouragement, honor and a reminder from the Lord, to all those who are running wounded or with pain and yet, have chosen the high road of greater dedication. They will be getting an amazing eternal reward, greater than all of those who took the low road!

Take these prophetic words seriously to heart because this is God's rhema word coming to us through these dreams. We need to be believing and receive, so we won't be cut off from receiving more.